The Space Weather Follow On Lagrange 1 (SWFO-L1) mission is a deep-space mission operating in a Lissajous orbit at the Sun-Earth Lagrange 1 (L1) point, enabling upstream measurements of solar wind disturbances before they reach Earth. It will provide continuous measurements of the sun’s corona and of the solar wind at the L1 point and transmit continuous real-time data to Earth.

The SWFO-L1 Observatory will have a 5-year mission life with on-board consumables to last 10 years. The spacecraft and instruments are high heritage designs. Only the Compact CORongraph (CCOR) instrument, reference Section 2.2 included technology development which was completed early in the program. SWFO-L1 will be launched as a rideshare with NASA’s Interstellar Mapping and Acceleration Probe (IMAP) mission, scheduled for launch the second half of 2024. 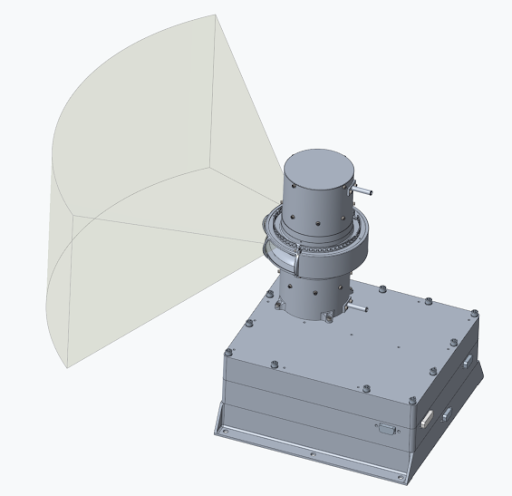 SWiPS monitors the solar wind for abrupt changes, which can result from interplanetary shocks, coronal mass ejections, corotating interaction regions or high speed solar wind, because these can cause geomagnetic storms that are harmful to life and technology

Geomagnetic storms are an aspect of space weather that cause reconfigurations of Earth’s magnetic field.  This protective bubble surrounding Earth, known as the magnetosphere, is disturbed by changes in the solar wind, resulting in effects that can disrupt electric power facilities, cause global positioning system errors and outages, impact aircraft operations and communication, and pose risks to spacecraft and manned spaceflight.  The severity of geomagnetic storms – their geo-effectiveness – can be predicted using measurements of the solar wind velocity, density, and temperature provided by SWiPS, along with information from the SWFO-L1 Magnetometer (MAG).

SWiPS velocity measurements can be used to predict the arrival time of adverse space weather conditions.  With this forewarning, public and private organizations affected by space weather can take actions to protect their assets. 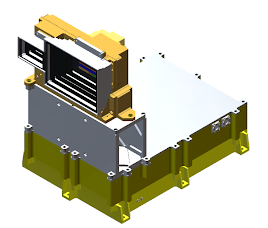 STIS suprathermal ions (25-6000 keV) have energies higher than that of the bulk plasma measured by the Solar Wind Plasma Sensor (SWiPS) and are produced by local solar acceleration as well as acceleration at a CME shock front.  Analysis of these spectra can aid in estimating the arrival time and strength of CME shocks, providing earlier guidance for geomagnetic storm forecasts.  Geomagnetic storms are an aspect of space weather that cause reconfigurations of Earth’s magnetic field.  This protective bubble surrounding Earth, known as the magnetosphere, becomes disturbed by changes in the solar wind, resulting in effects that can disrupt electric power facilities, cause global positioning system errors and outages, impact aircraft operations and communication, and pose risks to spacecraft and manned spaceflight.

STIS makes in-situ observations of ions, providing an earlier warning of geomagnetic activity before the CME itself arrives at the SWFO-L1 observatory.

CMEs that drive the strongest storms are more likely to have associated suprathermal ions.  These ions provide space weather forecasters with information that enhances the warnings provided to public and private organizations affected by space weather.

STIS will also measure electrons with energies between 25-250 keV.  These electrons can provide advance warning of Solar Energetic Particle (SEP) events because the lighter SEP electrons travel faster than the heavier SEP protons.  SEP events present a danger to astronauts, spacecraft, and aviation, to name just a few of the impacts.  Many rocket launches monitor for SEP events and will abort launches if dangerous conditions will occur in flight.

The STIS instrument consists of a single sensor which contains a pair of solid state telescopes.  At the exposed ends of each telescope are baffled collimators with apertures measuring 80°x60°.  Each telescope consists of a stacked pair of doped silicon detectors, and each has two active regions.  Active Region 1 (AR1) is a small 0.1 cm2 pixel to measure high fluxes, and Active Region 2 is a larger 1.0 cm2 annular region surrounding AR1 to provide anti-coincidence shielding as well as sufficient area for intervals of low particle flux.  While the electron measurements will themselves be useful for space weather solar energetic particle event warnings, they are also needed to understand background contamination in the ion telescope. 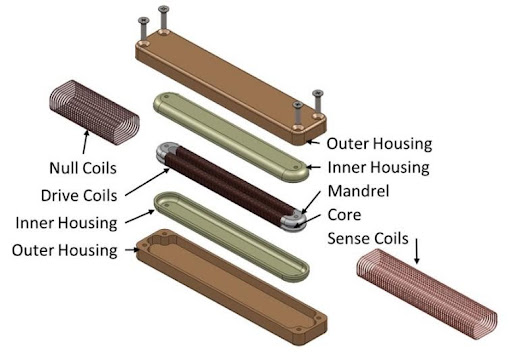 The SWFO-L1 magnetometer (MAG) instrument consists of two tri-axial fluxgate magnetometers that each measure the three components of the interplanetary magnetic field carried by the solar wind. By observing the solar wind, MAG provides real-time, around-the-clock observations of the magnetic structures directed toward Earth.

MAG monitors the interplanetary magnetic field for abrupt changes which can result from interplanetary shocks, coronal mass ejections, corotating interaction regions or high speed solar wind that can result in geomagnetic storms that are harmful to life and technology.

Geomagnetic storms are an aspect of space weather that cause reconfigurations of Earth’s magnetosphere. The protective magnetic bubble surrounding Earth is disturbed by changes in the solar wind, resulting in effects that can disrupt power facilities, cause communications blackouts and harm satellites and astronauts. The magnetic field magnitude and orientation provided by MAG, along with parameters derived from the Solar Wind Plasma Sensor (SWiPS) are of critical importance for predicting the severity of geomagnetic storms – their geo-effectiveness.

MAG makes in-situ observations of the magnetic field directly upstream from Earth, providing an early warning of geomagnetic activity.  With this forewarning, public and private organizations affected by space weather can take actions to protect their assets.

The SWFO-L1 MAG sensor’s elongated racetrack shape distinguishes it from the traditional circular ring-shaped magnetometers. The elongated design provides three benefits: it reduces noise by focusing the magnetic field along its length, has more definite orientation by aligning the magnetic axis with the mechanical axis, and enhances thermal stability by distributing heat more uniformly along each axis.

The two MAG sensors, an inboard and an outboard sensor, are located 3.946 and 5.6 meters away from the spacecraft, mounted on a 5.6 meter deployable boom. The boom isolates the magnetometers from any spacecraft-generated fields, providing a quiet operational environment. 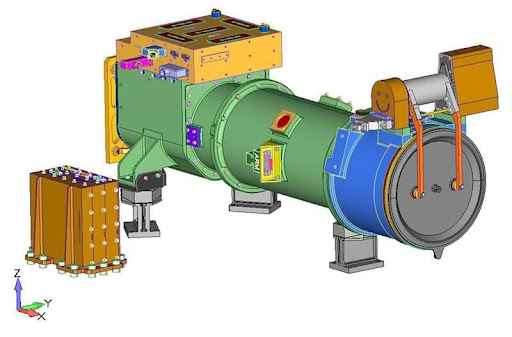 The Compact Coronagraph (CCOR) consists of two slightly different coronagraphs.  Both are novel designs, allowing for a smaller coronagraph than the previously-flown traditional Lyot designs.  CCOR-1 will fly on the GOES-U observatory, and CCOR-2 will fly on SWFO-L1.  Both instruments will observe the density structure of the white-light solar corona (atmosphere), enabling detection of Coronal Mass Ejections (CME) shortly after they erupt.

CCOR monitors the solar corona for coronal mass ejections that, when directed towards Earth, can result in geomagnetic storms that are harmful to life and technology.

Geomagnetic storms are an aspect of space weather that cause reconfigurations of Earth’s magnetosphere. The protective magnetic bubble surrounding Earth is disturbed by changes in the solar wind, resulting in effects that can disrupt power facilities, cause communications blackouts and harm satellites and astronauts.  By detecting CMEs shortly after they erupt, CCOR provides the longest possible lead time for geomagnetic storm watches.

With this forewarning, public and private organizations affected by space weather can take actions to protect their assets.

Space weather itself can impact coronagraph images.  In particular, solar radiation storms result in ‘snowstorm’-like impacts of energetic protons on coronagraph images.  These radiation storms often happen in conjunction with the most severe CMEs, potentially blinding the instrument from seeing the CME.  However, a special on-board scrubbing algorithm has been implemented that will scrub the energetic proton hits to reveal the CME.  Figure 2 below shows the algorithm working when 75% of the image is affected (top) and when 97% of the image is affected (bottom).

The main differences between CCOR-1 and CCOR-2 that affect the observations are in the field-of-view (FOV), the spatial resolution, and eclipses.  The larger FOV of CCOR-2 will provide more images of the fastest CME’s ensuring they are well observed and enabling more accurate modeling, though this larger FOV comes at the expense of spatial resolution.  CCOR-1 will experience an eclipse that results in one or more images missed on 42% of the days of the year.  CCOR-2 will not experience eclipses, but will likely not be able to image during certain observatory maneuvers. 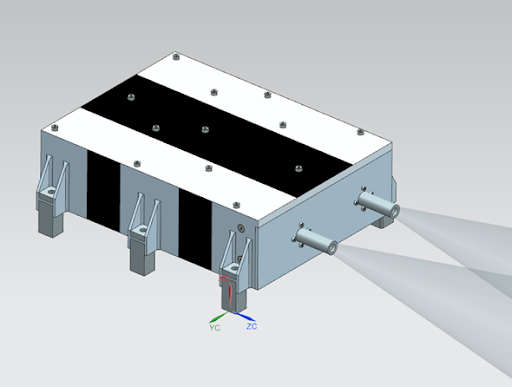 Monitoring of the X-ray emission of the Sun is important for tracking of changes in the solar activity, and in particular, the solar corona. During solar flares, a wide range of electromagnetic radiation is emitted. Due to the high temperature of the plasma, the emission peaks in X-rays, and therefore X-rays are optimal for characterization of solar flares.

Solar flares have a significant role in Space Weather. X-rays from strong solar flares cause significant variations in the properties of the Earth’s ionosphere, changing the transmission and reflection of radio waves in the atmosphere. Thus, ionospheric disturbances can have serious impacts on services that depend on satellite navigation and telecommunication. Big solar flares are usually associated with solar energetic particle (SEP) events that also affect the ionosphere. Besides, high energy particles from the Sun enhance the level of space radiation, with the biggest impact in the polar cap regions of the Earth, where the radiation levels increase at regular flight altitudes of airplanes. Coronal mass ejections (CME) that are the cause of major geomagnetic storms, occur often during the same periods of time as strong flares, and thus large X-ray flares indicate higher probability of an upcoming CME. This enables the use of a solar X-ray monitor for pre-warning of space weather events.

XFM is designed for the future, and potential new ways of exploitation for the benefit of future space weather services and scientific research. The data is versatile, including multi-channel broadband flux data and spectra, compressed effectively to minimize the telemetry. However, it also complies with the present standard X-ray measurements of the Sun. Well-defined subsets of the XFM flux data channels are designed to correspond precisely with the nominal flux channels of the GOES X-ray flux monitors. This enables straightforward cross-calibration and complementary use of the XFM with the currently existing instruments.

XFM is developed by the Finnish industrial team led by ISAWARE. The other companies in the consortium are, Aboa Space Research Oy (ASRO), Oxford Instruments Technologies, RUAG Space Finland, and Talvioja Consulting.

ESA has selected the XFM for the mission to the L5 point of the Sun-Earth system.

Monitoring of the solar X-ray emission from the L5 point enables tracking of flares already before they are visible to instruments on the Sun-Earth line. Longer monitoring periods are expected to give more accurate forecasting of the coming solar flares from the region and support the forecasting of CMEs that will potentially strike the Earth. XFM is not an imaging instrument. It measures the integrated X-ray flux and spectrum of the whole visible part of the Sun and the corona, but it cannot detect the position of individual flares or active regions. Identification and accurate positioning of the flares and active regions can be done by simultaneous EUV imaging of the Sun.

ESA is also planning to fly another XFM instrument onboard the SWFO operational space weather monitoring mission of NOAA to L1 to further improve the cross-calibration of the measurements and enhance the bonus-science from the missions.